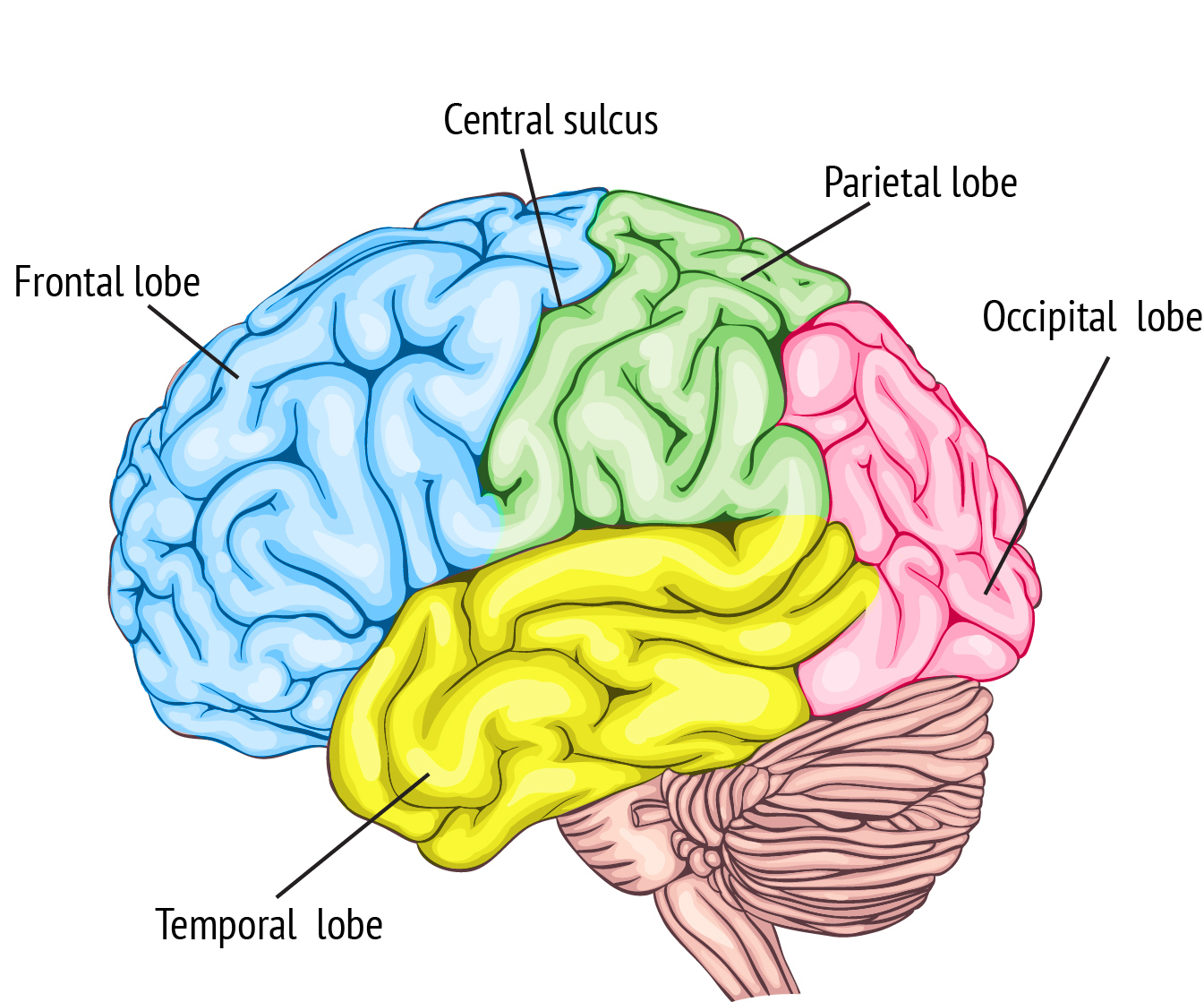 The frontal lobe is involved with the main executive functions of the brain, which include:

The parietal lobe is concerned with appreciation of basic sensations, such as touch, pain, pressure, temperature (heat and cold) and various joint movements.

It is also responsible for the discrimination of the intensity of various stimuli, like distinguishing warm from hot, ice-cold from cold, etc.

It is responsible for storing data, which helps in later fine tuning tactile sensation, i.e., it helps in recognizing common familiar objects placed in our hand without looking at them.

Parietal lobe helps in recognition of spatial relationships, that is, realization of the exact point of tactile sensation, the ability of discrimination between two points of tactile stimulation etc.


The temporal lobe is a region of the cerebral cortex that is present beneath the Sylvian fissure. It is present on both sides of the brain. This lobe is home to the primary auditory complex. This lobe contains the hippocampus.

The sensation of smell is also registered in the temporal lobe.

This lobe is also partly responsible for emotion, memory and speech.

The primary function of the occipital lobe is controlling vision and visual processing. This organ helps us see and identify different things that we look at. It also helps us differentiate and understand distinct colors. As soon as a baby is born, this lobe begins to function. The visual stimuli received by the infant's eye is sent over to the occipital lobe that helps the baby interpret the vision. As the infant grows, his/her vision becomes more and more acute, and the ability to understand various images by this organ also increases.

The occipital lobe also points towards brain injury or brain disorders. If the brain suffers from damage, injury, or illness, it will affect the vision of the person. A brain disorder called occipital lobe epilepsy affects the occipital lobe of the brain. This condition leads to hallucinations and even seeing the same image repetitively. It may even cause uncontrollable blinking and involuntary movements of the eye. In some cases, it may lead to severe eye pain, seizures, and even blindness. This condition is, however, treatable by medical intervention.

In case a person is hit by an object at the back of the head due to an accident or suffers from traumatic brain injury, he may suffer from irreparable damage to the occipital lobe. This may cause vision problems, hallucinations, and failure to interpret the visual stimuli. It may also lead to complete blindness or change in vision.

The functions of this lobe are divided according to several visual areas. These areas are not anatomically distinguishable but are mapped by physiologists using electrode recordings. The primary visual cortex is the first functional brain region related to the occipital lobe. The functions include description, color properties, local orientation, etc., within a small receptive field.

The functions of the occipital lobe may have a hand in the origination of the popular phrase 'eyes at the back of the head.'

Visual inputs follow a slightly complex rule - the optic nerves from the two eyes come together at a point called the optic chiasm, and here, half the fibers of each nerve split off to join the other. Thus, impulses received from the left half of the retina in both eyes go to the left side of the brain, while the impulses from the right half of the retina go to the right brain.

The retinal sensors that are present in the eye are stimulated when rays enter the eye and reach them. This stimuli then is conveyed to the cuneus (Brodmann's area 17). From here it goes on to the optic tracts and the lateral geniculate bodies of the thalamus, where optic radiations then continue onto the visual cortex. Each visual cortex receives raw sensory information from the outside half of the eye present on the same side and from the inside half of the eye present on the other side of the head. Finally, the image is then projected in the cortex. Given below is a diagram of the visual cortex of the brain.


The diencephalon sits beneath the middle of the cerebrum and on top of the brain stem. It contains two important structures called the thalamus and the hypothalamus, of which the hypothalamus connects with the pituitary complex.


The thalamus is a paired structure that is a part of the diencephalon. Each thalamus is a large, egg-shaped cluster of nuclei (gray matter). The two thalami lie close together, and are joined across the mid-line by a mass of gray matter called massa intermedia. This is the center that acts as a relay station for incoming sensory nerve impulses, thus sending these impulses to the required appropriate regions of the brain for further processing. Most sensory signals, like auditory signals, visual signals and somatosensory signals go through this structure before being further processed in the brain. It also plays a major role in motor control, and is responsible for control of muscular movements through its various connections with the basal ganglia, cerebellum and the motor cortex. Basically, it is responsible for letting the brain get information on what is happening outside the body.


This is a small structure present in the diencephalon that plays a vital role in maintaining homeostasis, that is, a state of equilibrium within the body. The thalamus keeps conditions in the body constant, preventing any sudden change from occurring. It regulates various sensations, such as hunger, thirst, temperature, libido among other things. It is also responsible for the circadian rhythm which is exerted in the body (the daily sleep and awake cycle). It also plays a vital role in emotions, autonomic functions and motor functions. It tries to maintain homeostasis by exerting control on the pituitary gland.


The pituitary gland, or the hypophysis, is a small pea-sized gland, that is present in the skull, resting in a cavity of the skull called the sella turcica. It is an endocrine gland that is involved with secreting various hormones, and thus, establishing hormonal balance in the body.